lifestyle & travel from a millennial mind

For this weekend’s adventure in New Orleans I checked out Arts Council New Orleans’
2016 Luna Fête and the Miracle on Fulton Street with my friend Cara. I’m always amazed at the millions of ways that New Orleans knows how to celebrate anything and everything- and this weekend was no exception! I’d been looking forward to the event since featuring it in my 31 Ways to Spend 31 December Days in New Orleans and it totally lived up to the hype. Both of the events have quickly become mainstays on the annual NOLA calendar, so I wanted to share my

favorite moments from the night as well as some background on the celebrations.

The original star of Luna Fête is a 10 minute light and audio show projected onto the façade of Lafayette Square’s historic Gallier Hall. Gallier Hall is the former City Hall of New Orleans built right before the break of the Civil War, and currently acts as a reception hall and home to a small theater. Since it’s still viewed as an important symbol of the city, Mardi Gras royalty continue to enjoy the parades from the Hall’s steps each year as the parades roll down St. Charles Avenue. With the significance it carries in New Orleans history, (it was declared a National Historic Landmark in 1974!), it’s no wonder the Arts Council chose the building to display an amazing visual interpretation of the city’s past. The show has been the same since the inaugural Luna Fête in 2014, but this was my first year seeing it and honestly I can imagine it’d be just as spectacular to watch year after year. Some of my favorite designs were the galaxy, buzzing neon, and the mystical pre-settled New Orleans.

Within Lafayette Square the Arts Council featured a little art market from some of their members. I always love NOLA art markets, and although I didn’t pick up anything this time, Cara chose an awesome print of the city’s map from Walking Man Studios– one of my favorite local artists! (Note: I’m a very dangerous person to bring along to art markets because I will egg you on if you’re considering making a purchase…oops!) In the spirit of all the neon lights, there was a local vendor selling cotton candy on a glow stick and obviously we hopped in line immediately with all of the five-year olds and their parents. I mean, how could you resist?? All the while we were exploring, the Arts Council had THE BEST music to jam to throughout the park, “September” by Earth, Wind, and Fire, and “Lovely Day” by Bill Withers were some of my faves. With the classic hits, cotton candy, and all over good vibes it was impossible not to walk around and dance with a big ol’ smile. 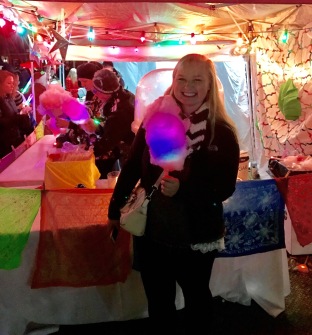 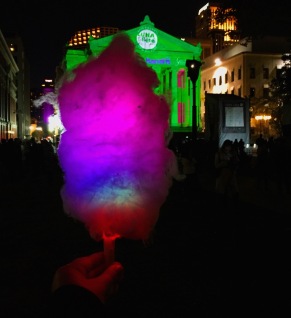 Next on our stop was a spectacular rainbow laser projection from visiting artist Yvette Mattern titled “Global Rainbow.” I had never seen anything like this before in my life, and both Cara and I were in complete awe as we strolled down Lafayette Street to see more installations. To us, it almost looked like the lasers would converge, but they never did. I can’t even begin to understand the science that goes into lasers, but it made for an amazing scene. According to nola.com, the lasers were supposedly visible from 35 miles away!

Along Lafayette St. on the way to Fulton there were even more installations from various artists and things began to get a little trippy- definitely as close to a rave as I’ll probably ever get in my life. From kaleidoscope-type holes in the ground to interactive ‘caves,’ there was something for everyone. I personally loved the giant aluminum bison I later learned is officially ‘Titan the Bison’ by local artist Brennan Steele. (see below) I don’t totally understand it (things got even stranger when someone started fire dancing in front of it…) but I do love it!

The Little Red Coffee Truck that Could

For New Orleans, this weekend was pretty dang chilly! Coming from Chicago and Colorado, Cara and I definitely should’ve faired the treacherous 50 degree weather better than we did, but thankfully we came across the Petit Rouge Café Camionette to warm up with some hot cocoa. No doubt I’ll be tracking its whereabouts in the future- so yummy! 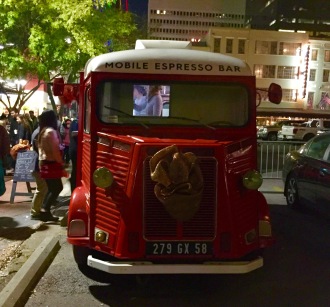 After grabbing our drinks/convenient hand warmers and chatting with some friends, we continued on to Fulton Street just in time to witness the hourly ‘snowfall.’ Was it cheesy and ridiculous? Yes. Did we love it anyways? ABSOLUTELY. The only downside to the faux sneaux is that it’s either soap or foam so try not to get it in your eyes or catch it on your tongue because it’s just not the same, take it from experience… 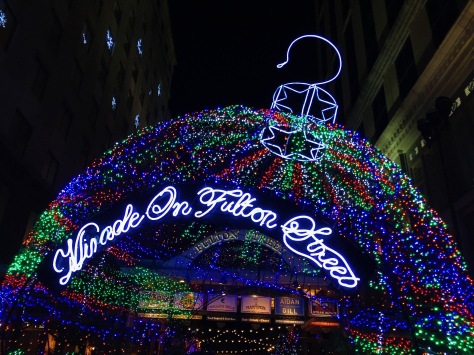 Inside the giant ornament with Cara

Can you spot the faux sneaux? 😉

Fulton Street was very crowded, so I would suggest visiting it earlier in the evening right as it starts to get dark. Although a bit kitschy, it’s definitely worth a pass through to enjoy the 30 foot Christmas tree bedecked in fleur-de-lis. We missed the gingerbread house version of St. Louis Cathedral in the Sheraton, so I know I’ll be back to feast my eyes before heading home for the holidays. Fulton Street, like Luna Fête, is fairly new to the city considering its history. The festivities began in 2007 to restore some holiday spirit in the city post-Katrina and were so popular that they’ve returned every December since. All in all, the celebrations made for such a fun night downtown and served as an excellent break from the finals grind! Looking for more ways to celebrate the holidays in New Orleans? Check out my top picks!

What was your favorite part of Luna Fête 2016? Let me know in the comments below!

What are your thoughts? Lemme know below! Cancel reply

​oh caroline. Just a millennial going to the places, eating the things, doing the stuff, and sharing it all! Check out my latest adventures, tips, & tricks on the blog. 28 countries in 23 years. Currently: Denver, Colorado.

keep up with the latest